Decisions:
Available each Thursday at 10:00 a.m. during the court term. 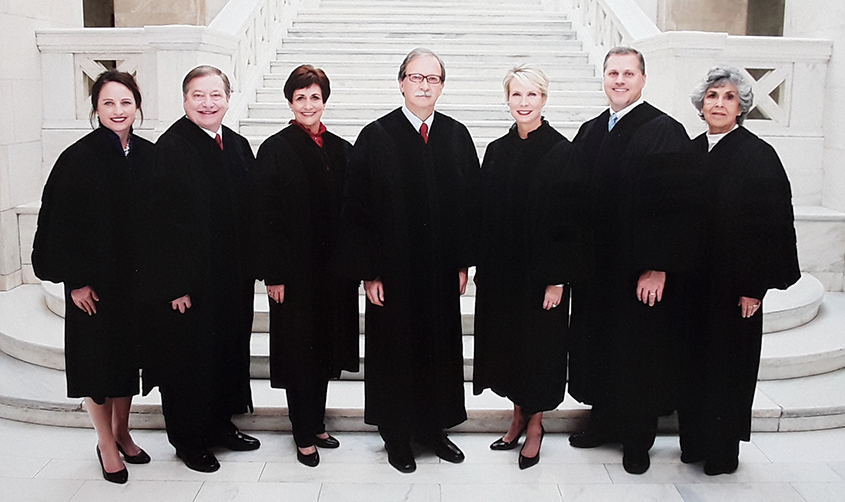 In 1836, Arkansas became the 25th state admitted to the union. Its first constitution created a supreme court composed of three judges including one styled Chief Justice, and directed that the judges be elected by the Arkansas General Assembly. Ark. Const. of 1836, art. VI, § §2 & 7. Daniel Ringo, Townsend Dickinson, and Thomas J. Lacy were selected to serve as the first supreme court judges, and Mr. Ringo became the first Chief Justice.

Effective July, 2001, the judicial article of the Arkansas constitution was rewritten by Amendment 80. Judicial power is vested in the Judicial Department of state government, consisting of a Supreme Court and other courts established by the Constitution. Ark. Const. of 1874, amend. 80, §1. The Supreme Court has statewide appellate jurisdiction and such other original jurisdiction as provided by the Constitution. Id. at §2. The Arkansas Supreme Court exercises general superintending control over all courts of the state. Id. at §4.

Constitutional amendment 28, adopted in 1938, vested the Arkansas Supreme Court with power to make rules regulating the practice of law and the professional conduct of attorneys at law.

Amendment 80, §16 describes the qualifications for an Arkansas Supreme Court justice:

The seven Arkansas Supreme Court justices are elected in statewide non-partisan races, and serve staggered terms, such that it is unlikely all members of the court would be replaced in one election. In the event a member of the court fails to serve the entire term of office, the vacancy shall be filled by appointment by the governor of Arkansas. Ark. Const. of 1874, amend. 29, §1. The appointee shall serve during the entire unexpired term in the office in which the vacancy occurs if such office would in regular course be filled at the next general election if no vacancy had occurred; otherwise, the appointee may serve until the first or second general election following appointment, depending upon the timing of that election. Id. at §4. No person appointed under Section 1 shall be eligible for appointment or election to succeed himself. Id. at §2.

All signed opinions of the Supreme Court handed down after July 1, 2009, are designated for publication and may be cited in briefs and other pleadings before the state’s appellate courts. Ark. Sup. Ct. R. 5-2. Opinions handed down prior to that date, and marked “not designated for publication,” are without precedential value and may not be cited as authority. Id. The slip opinion version of each opinion remains posted until any editorial changes are made by the Supreme Court Reporter of Decisions and approved by the judge or justice who authored the opinion. Slip opinions are not to be considered the final decisions of the court. Final official opinions of the court will be marked as such with the seal of the Arkansas Supreme Court. See the Reporter’s page for more information about electronic publication and the new citation format.

Questions regarding the Supreme Court docket or schedule, or requests for copies of appellate records should be addressed to the Clerk of the Courts.